The Solution Under Our Feet: How Regenerative Organic Agriculture Can Save the Planet

By John Roulac (reprinted with permission from author viaÂ EcoWatch)

Many of us are now choosing to eat holistically grown foods. We want:

â€¢ more nutrition from our food.
â€¢ to avoid toxic pesticides and GMOs.
â€¢ to create safer conditions for farmers and rural communities.
â€¢ to protect the water, air and soil from contamination by toxic agrochemicals.

While these reasons are important, one critical issue is missing from todayâ€™s conversation about food. The concept is simple, yet virtually unknown. The solution to our global food and environmental crisis is literally under our feet.

If you take away only one thing from this article, I want it to be this quote from esteemed soil scientist Dr. Rattan Lal at Ohio State University: 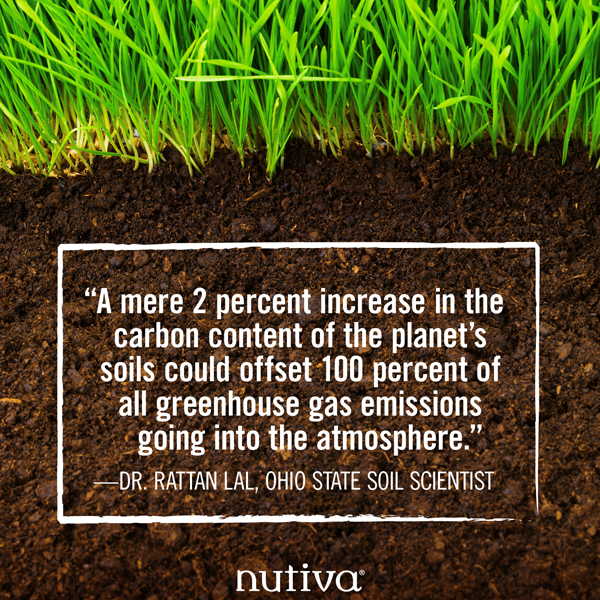 Through the past hundred years, weâ€™ve steadily increased our rate of digging up and burning carbon-rich matter for fuel. This is disturbing the oceanic ecosystem in profound ways that include reducing the plankton that feeds whales and provides oxygen for humans. And weâ€™re not just talking about the extinction of whales. As Iâ€™ll detail in this article, even Maine lobsters could become a relic of the past.

Weâ€™ve severely disrupted the balance in the â€œcarbon triadâ€ by clearing rainforests, degrading farmland, denuding pasturelands, and burning coal and oil. The carbon triad? Yes; think of the three main carbon sinks: the atmosphere, the oceans and the humus-sphere. While Iâ€™m sure youâ€™re familiar with the first two, you might not know about the latter carbon sink. Humus is the organic component of soil. (Gardeners create it as compost.) The humus-sphere is made up of the stable, long-lasting remnants of decaying organic material, essential to the Earthâ€™s soil fertility and our ability to grow nutrient-rich crops.

Up until now, the big oil companies Exxon, Chevron and Shell have been perceived as the main climate villains. Yet a new and growing movement of â€œcarbon cycle-literateâ€ people and organizations now realize that Monsanto, DuPont, Syngenta and big ag are much worse. We now know that 20-30Â percentÂ of all manmade green house gases in the atmosphere comes fromÂ industrial agriculture. Chemicals are for cars, not for the soil. By dumping agricultural chemicals onto our soils, we disrupt natureâ€™s delicate balance of water, soil and air.

In his recent Huffington Post piece â€œNature Wants Her Carbon Back,â€ Larry Kopald writes,Â â€œHow is it possible that with the entire planet focusing on reducing CO2Â emissions weâ€™re not even paying lip service to the single largest contributor?â€

Tom Newmark, ex-CEO of New Chapter and co-founder of the Carbon Underground Project, has said it best: â€œMany NGOs view carbon and agriculture as the â€˜enemy.â€™ The regenerative movement sees carbon as our friend, and agriculture as our natural ally to help our friend carbon return to the land.â€ The challenge is that the enemies of all things natural, i.e., Monsanto, DuPont and Syngenta, are culture jamming in hope that the regenerative message wonâ€™t go viral.

Two of those three carbon sinks are maxed out, while the soil, where the humus-sphere resides, has lost most of its humus due to the use of industrial farming techniques and bad land-management practices. This leaves the soil as the primary sink where our excess carbon can be sequestered. Yet nature is abundant and forgiving. Recent research in the fields of wetland, pasture, forest and crop production has illustrated that, by changing our management strategies, we can create more nature-centric systems that improve our quality of life rather than degrading it.

Carbon farming is an agricultural system implementing practices that improve the rate at which CO2Â is removed from the atmosphere and converted to plant material and/or organic matter in the soil. Today excess carbon is falling into our oceans and creating acidic conditions that threaten plant and animal species. If we remove carbon from the atmosphere and oceans by implementing the practices of regenerative organic agriculture, weâ€™ll sequester carbon into the soil and expand the soilâ€™s water-holding capacity. Building organic matter into the soilâ€™s humus layer is essential for growing the healthful foods humanity needs.

As a 2014 Rodale Institute report states, â€œOrganically managed soils can convert carbon CO2Â from a greenhouse gas into a food-producing asset.â€ Two major upsides to this approach are drought-proof soils and, thanks to more nutrient-rich foods, reduced healthcare costs.

If this is the first youâ€™ve heard about this idea, itâ€™s because the good news is just starting to trickle out. For example, the Marin Carbon Projectâ€™s work with compost and rangeland was recently featured on the cover of the San Francisco Chronicle.

The mission of the Carbon Cycle Institute (part of the Marin Carbon Project) is â€œto stop and reverse global warming by advancing natural, science-based solutions that remove atmospheric carbon while promoting environmental stewardship, social equity and economic sustainability.â€ The institute is also focused on carbon-cycle literacy, a form of savvy still greatly lacking in the general population, by educating and empowering people to make more informed choices and to demand that elected officials do the same.

Recently the American Carbon Registry, a nonprofit organization that creates protocols for carbon usage, approved standards that would reward ranchers for land practices that sequester carbon. Rancher John Wick, a Carbon Cycle Institute founder, has said, â€œOur proposal is that there is a whole other paradigmâ€”that agriculture practices can be . . . the art of transforming atmospheric carbon into biospheric carbon.â€ As of this writing, I understand that Gov. Jerry Brownâ€™s office plans to visit Wickâ€™s ranch.

From the regenerative agriculture movement has also come a fascinating new book by Kristin Ohlson that I strongly recommend: The Soil Will Save Us: How Scientists, Farmers and Foodies Are Healing the Soil to Save the Planet.

Chemical Ag Is the Worldâ€™s Leading Problem, andâ€”Yesâ€”We Have an App for That

We know our oceans are polluted by chemical fertilizer runoff from industrial agriculture, which has caused more than 500 dead zones such as the Mississippi Delta. Even more disturbing is the rarely acknowledged fact that chemical fertilizers and confined animal feedlot operations (CAFOs) give off more greenhouse gases (GHGs) than all transportation methods combined. As this carbon falls into the sea, our oceansâ€™ pH balance is thrown off.

On Nov. 14, 2014, the Canadian CBC News reported on the alarming issue of the rise in ocean temperatures, quoting Kevin Friedland, an oceanographer with the National Oceanic and Atmospheric Administrationâ€™s National Marine Fisheries Service in Narragansett, R.I., as saying: â€œFor the northeast shelf, that summer half of the year will increase on the order of two months.â€

Scientists are actively investigating another potential effect of warmer temperatures thatâ€™s happening right nowâ€”a dramatic dip in the spring bloom of phytoplankton in the Gulf of Maine: â€œIn 2013, the spring bloom was so poorly developed it was below detection thresholds used by scientists.â€

Did you know that two out of every three breaths you take come via ocean phytoplankton? And that phytoplankton is currently in steep decline due to ocean acidification? Many researchers think that within only a few decades planet oxygen levels will have dropped dramatically. As National Geographic has reported, â€œâ€¦Â relatively new research is finding that the introduction of massive amounts of CO2Â into the seas is altering water chemistry and affecting the life cycles of many marine organisms.â€ Remember: plankton is the main food source for whales. Thus, as the plankton dissipates, the whales will disappear.

Unfortunately, the government, the media and even climate-change groups are quiet on this vital issue. The silence is perplexing. All the regulatory agencies of the federal government, and even the alternative media, have so far failed to bring to the fore this concern. Itâ€™s time we focused on soil, not oil.

On a note of hope, the United Nations, on its Dec. 5, 2014, inaugural World Soil Day, called for 2015 to be the International Year of Soils. Also, acclaimed author Michael PollanÂ recentlyÂ gave a keynote speech (see below) at the New York Times Food for Tomorrow conferenceÂ (Pollanâ€™s key points are summarizedÂ in the last 5-6 minutes) in which he stated:Â â€œThere are two faces of the climate-food system connection: how food is a key driver of climate change, responsible for between 20 to 30 percent of greenhouse gases, and thenÂ the very hopeful research on how changes in agriculture hold the potential not just to mitigate these impacts, but to actually help remove carbon from the atmosphere in largeÂ quantities. Climate change changes the â€˜how to feed the worldâ€™ question in important ways, rendering many of the traditional argumentsâ€”for higher productivity at all costsâ€”moot.â€

Another positive venture is the XPRIZE Ocean Health project, a two-million-dollar global competition challenging teams of engineers, scientists and innovators (even surfers and schoolkids) all over the world to create and use pH sensor technology that will â€œaffordably, accurately and efficientlyâ€ measure ocean chemistry. Theyâ€™re testing 18 technologies for use in a new Cloud-based app to provide real-time monitoring of oceans. The Culver City-based group is funded in part by Microsoft cofounder Paul Allen and Tesla and SpaceX founder Elon Musk, and the pH sensor project is headed by Wendy Schmidt (the wife of Google executive chairman Eric Schmidt).

As chemical companies, the oil industry and the media ignore the fact that our oceans are becoming more acidic from excess carbon, Terrie Klinger, Professor of Marine Affairs at the University of Washington, comments, â€œWe can attribute the problems in the oyster hatcheries to the increased carbon in the ocean.â€ The acidification of the seas is also especially detrimental to organisms, such as coral reefs, that secrete shell material.

Recently the state of Maine received a state-mandated report that appeared in Maineâ€™s Press Herald article of Dec.1, 2014, titled â€œStudy committee calls for Maine to act on ocean acidification.â€

An excerpt: â€œMaine should increase research and monitoring into how rising acidity levels in oceans could harm the stateâ€™s valuable commercial fisheries, while taking additional steps to reduce local pollution that can affect water chemistry.

â€œThe Legislature created the commission this year in response to concerns that, as atmospheric carbon dioxide levels have risen, the oceans have become 30 percent more acidic because oceans absorb the gas.â€

Researchers are concerned that organisms that form shellsâ€”everything from Maineâ€™s iconic lobster to shrimp and the tiny plankton that are key links in the food chainâ€”will find it more difficult to produce calcium carbonate for shells in the more acidic seawater. They worry that the acidification could intensify as carbon levels rise and the climate warms.

China, India and Indonesia are creating dozens of new coal-burning power plants. In fact theWall Street Journal recently reported that India plans to double the number of coal plants by 2020. If we fail to correct the course weâ€™re on, this proliferation of carbon will destroy not only oyster and crab populations but also the phytoplankton that provides more than 60 percent of all oxygen on the planet. While these issues are complex, simply changing your diet is one of the most powerful counteractive measures you can take.

John RoulacÂ is founder and CEO of Nutiva, a leading organic superfoods brand. Nutiva has been named one of Inc magazineâ€™s fastest growing companies for sevenÂ years in row. John has been supporting the movement to protect our planet for a long time. He is a founder of GMOInside.org and helped organize the Soil Not Oil conference ahead of COP21.

Subscribe to our newsletter for upcoming events and podcast releases!

Please log in again. The login page will open in a new tab. After logging in you can close it and return to this page.

Discover What You Need to Build Momentum In Regenerative

Sign up to discover upcoming events and regenerative insights from Regenerative Rising.

You've made a wise choice!

Soon you will be receiving some of the best At The Epicenter's regenerative insights delivered right to your inbox in the next newsletter.